How to Improve Your Google Places Ranking 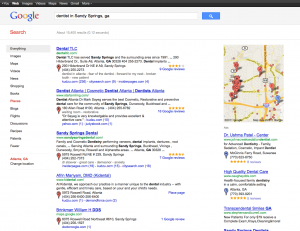 The past few weeks have caused major headaches for users of Google Places.  Businesses, for what seemed as if no reason, were hit with a blow to their Places ranking with little or no explanation as to why their listing suffered.  This past July, Google announced that it would be dropping outside reviews from Google Places, which caused a fuss in and of itself.  Now it would appear as if Google has brought outside reviews back into the algorythm, bumping some Places up, and others further down and out of site.  Bringing the outside reviews back into the Places search engine results pages (SERPs) is only part of the change that has affected users.

When Google announced that it was dropping outside reviews from Google Places, it had seemed as if Google was focusing on pushing their own reviews.  Before the purge of outside reviews, Google had previously pulled in excerpts of reviews from outside sources such as Yelp (ended as of 8/2010,) CitySearch, and Kudzu.  The move seemed to have been taken due to a series of antitrust issues with the outside review sites whom gained nearly nothing due to Google pulling in their content onto Google’s Place pages.  By doing this, Google appeared to favor their own services.  Naturally, most SEO specialists and marketers thought that the split was final… At least, up until a few weeks ago when we started to notice Kudzu, CitySearch, Yahoo, and a handful of other review sites being pulled back into the algorithm.

Who was affected by the Google Places update?

While some businesses have benefited from this change, others have crumbled under the update.  Some businesses turned their focus towards gathering Google Reviews for their Places page, rather than turn their clients to Kudzu.  Clients such as these were dealt the toughest blow to their rank.  A client with 10 Google reviews, and zero Kudzu reviews will typically rank lower than a business with 5 Google reviews and 5 Kudzu reviews.

When it comes to outside reviews for Google Places this time around, Google is not pulling in content to fill their Place pages from the other review sites.  They are taking links that are connected directly to the review site pages.  This may help the organic Place page listing as well.  It is possible that Google is link building on their already favored Places page.  It is difficult to tell how the alogrithm works exactly (Google isn’t talking,) but there are a few things that you can do to improve your Google Places listing.

How to improve your Google Places rank with reviews

The outside review sites are connecting to the Google Places page by identifying the URL used in the Places page.  If you use a 301 redirect for your site or if you re-point your domain, this is where things can get a little bit tricky.

When listing your website’s URL, it is imperative that you stay consistent with how you list it.  If you do not have a 301 redirect, I strongly suggest you have your web developer set one up for you.  The best way to stay consistent with listing your URL is by dropping the “www.” in front of it.  For instance, I would list our URL as “http://trustworkz.com” rather than “http://www.trustworkz.com.”  You might think that it is the same link, but it is not.  Set your Google Places page up with “http://yourURLhere.com” and be sure to stay consistent throughout the rest of your web presence.  Your Google Places page will take some time to update, but it will begin to draw the outside review site links anywhere from 24 hours to a few weeks.  It’s hard to say how fast Google updates this part of Places exactly, because of how fast they update Places descriptions (anywhere up to 6 weeks.)

Target a variety of review sites

A couple of months ago, digital marketers advised their clients to target Google Reviews.  There are many reasons for why a Google Places page ranks higher than another; however, one thing seems to stand out above them all.  Place pages that pull in a variety of reviews seem to rank higher than others.  Google has admitted that the third party reviews are more important than their own now.  You can see the results by experimenting on your own, or by enlarging the picture above.  Traditional SEO for the Places page does play a role in the ranking, but not as much as the opinion of customers.  It appears that Google wants your small business to be available for reviews on multiple channels as to meet the needs of as many users as possible. Find out which review sites are most important to your niche, and then “claim” the listing so that you have total control over the details.  This will allow you to monitor and promote the review pages to your clients when necessary.